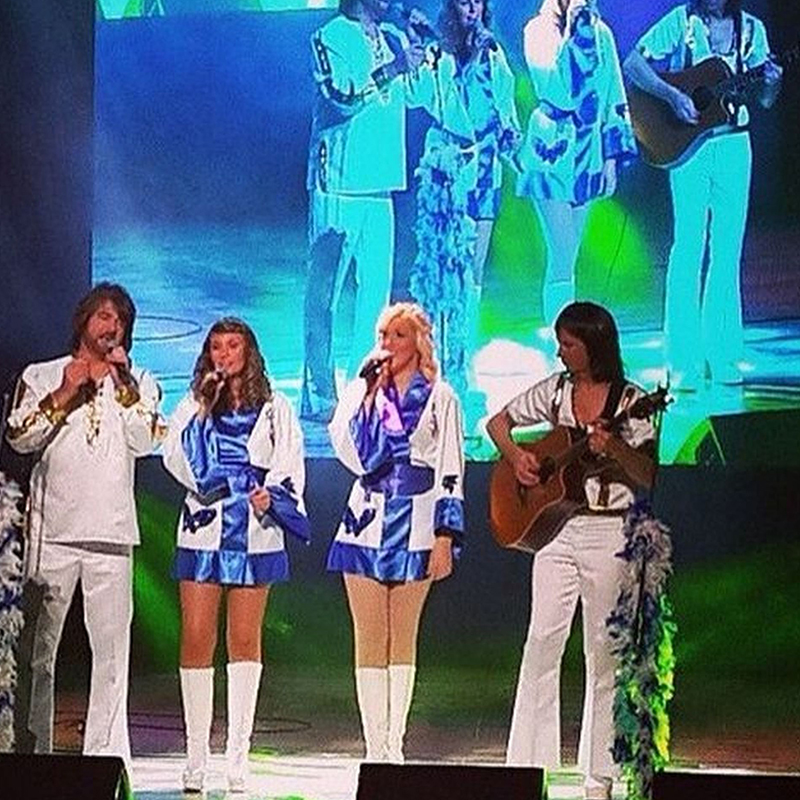 Abbagirls Duo was conceived by our Kim Graham Cross (Frida) in March 1995. The idea was to bring the fantastic sounds and harmonies of Abba to venues that did not have the room for a full band. But such is our success we now perform in every type of venue, over 4500 shows in 42 different Countries & 5 Continents, from large outdoor concerts to large corporate events, hotels, weddings, golf clubs Etc. as well as the local village hall! Benny & Bjorn joined us for band gigs in 1999 giving us the option as a duo or live 4 piece band or more.

Here is an example of some of our previous gigs:

Three times at The Brentwood Centre Essex Over 25,000.

The Variety Club of GB: We also together with Faith Brown presented a "Sunshine" Bus to the kids of Liverpool. Followed with a great show at The Liverpool Empire compared by Frank Carson.

Obtained a sponsorship From Budweiser for a 30-gig tour followed by a blaze of fabulous publicity.

We also made the Abba jingles for Talk Sport Radio.

Other prestigious venues in the UK include:

We have appeared Live on:

Hundreds of Newspapers and Magazines.

We have traveled to:

N. Ireland, Channel Islands, UAE, New York, Many states in the USA, South America, Russia, Germany, Denmark, Sweden, Belgium, Qatar, France, Korea, Japan, Hong Kong, Australia, Czech Republic, Isle of White, and of course all over the UK. Over 40 countries worldwide and performed in 5 of the 7 Continents we are truly an Internatinal Act.

Abbagirls main workload is Corporate & Hotel Functions Among our many corporate clients are:

We have shared the stage with:

As well as many privately owned sites. (We have seen some "Carry-on's"!)

This is a conservative list! We achieve well over 200 gigs per year over 4000 gigs so far!